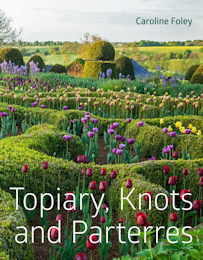 In her Topiary, Knots and Parterres (Pimpernel Press, £50) Caroline Foley takes us to a world where nothing is left to Nature and where the geometrically-inclined hand of man rules.  Clipaholics will love this fabulous contemplation of the bladesman’s skills, with sumptuously rich chapters devoted to such times and places as the Patrician Gardens of Rome, Medieval Europe, the Italian Renaissance, the Dutch Golden Age, Tudor, Stuart, eighteenth- and nineteenth-century England, culminating in the century-old Arts and Crafts Movement, whose aficionados were as deft and creative with the shears as any of their predecessors.

Foley, editor of Toparius, the pan-European journal of the European Boxwood and Topiary Society, sets out her stall with great conviction:

[My] book is a celebration of the delights of topiary, which – according to the Oxford Companion to Gardening – is quite simply the ‘art of shaping and training trees and shrubs’. My aim is to knock it oV its perch as the grandee of garden techniques and to explode any false mystique surrounding it as an exclusive type of gardening. Topiary is a medium that deserves to be in every gardener’s box of tricks, and the techniques should be at the disposal of every horticultural student. It can make a splendid alternative to expensive architecture and sculpture. It lends itself to folksy humour as much as to clipped perfection – covering the full gamut from the ridiculous to the sublime.

Knots and parterres are the two-dimensional equivalents of topiary, design conceits upon the ground that delineate flower beds and pathways in intricate and in some cases, extensive patterns. Geometry is all, employing straight lines, circles, ovals and false perspectives or the likes of plentiful ‘wiggles’ such as those adopted by Batty Langley in 1728, in his derision of the ‘stiff regular garden’.

There is so much to instruct and amuse the reader, and the detail is occasionally impressively arcane and blissfully whimsical. For example,

As to [a garden’s] womanly serpentine curves, they too were now losing their novelty and charm. The garden designer Shirley Hibberd (1825–90) expressed the opinion that the C and S shapes, the half-moon, and the ‘newt shaped’ beds ‘twisted like eels in misery’ . . . [while] Thomas James, author of ‘An Essay on the Poetry of Gardening’ in the Quarterly Review (1852) commented on the ‘unmeaning flower beds that look like kidneys and tadpoles, and sausages and leeches, and commas’.

Beautifully written, lavishly – nay, opulently – illustrated, I’ll be cross if this book doesn’t win its author a prize or itself attract a distinctive award.

The illustrations are superb.  Every page brings a new wonder.

The result of her (Caroline Foley’s) labour is a magnificent hardback comprising authoritative text matched with excellent, well-researched illustrations.  It offers inspiration to seek out the many fine examples of topiary in this country and across Europe, as well as encouragement to emulate something of those great and varied gardens in smaller domestic settings.

‘She (Caroline Foley) leads the readers on an entertaining romp through gardens from Ancient Rome to the present, showcasing topiary’s  versatility  and practicality in examples drawn from four continents. Thoroughly researched, this book incorporates literary references, poetry and inspiring illustrations  to demonstrate the tenacity of topiary.

Foley’s enjoyable style means that she gets her historic  points over easily:  for instance, how the flatter terrain of France  changed the way Italian gardens were imported. And her learning is impressive: Byzantine romances, religious symbolism, and the interaction of gardens  with other interests of the French nobility – tapestry, china, ceiling painting and fabrics, particularly silk – are just a few amongst the hundreds of references that enrich her text.

THE WORLD OF INTERIORS

At a Versailles ball of 1745, elaborately dressed guests have gathered in the Hall of Mirrors to celebrate the dauphin’s marriage  to Maria Teresa’ Rafaela of Spain. Among them stand eight people dressed as clipped yews, one of whom is Louis XV in hot pursuit of Madame de Pompadour.  This wonderful image is the frivolous side of topiary, the art of shaping and training trees and shrubs. Often seen as the ‘grandee’ of techniques, it’s in fact, claims Caroline Foley, a medium that deserves to be in every gardener’s box of tricks. As editor of Topiarius, the journal of the European boxwood and Topiary Society, Foley is well qualified for the task and wastes no time in guiding us, chapter by chapter through the history of clipping, shaping and designing patterns, knots, labyrinths and mazes.